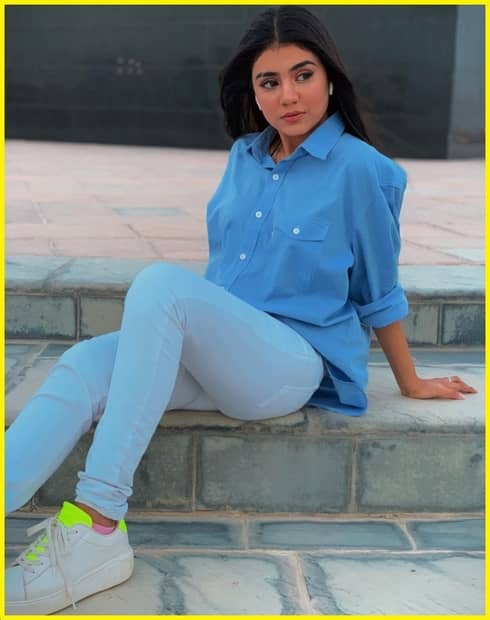 Areeka Haq is a famous Pakistani social media personality and Tik Tok star. She has a huge fan base on TikTok and on his Instagram account. She is a very attractive and stylish girl. Areeka creates dubbing kind of videos on Romantic sound clips. She always wears lense on his eyes, Areeka life has been completely changing after she became famous on Tik Tok and Instagram.

Presently, She is 20 years old and she was born on October 20, 2002 in Karachi, Pakistan. Areeka Haq has stepped into mainstream media and her first work was in Asim Azhar’s song ‘Tum Tum’. She is one of the biggest TikTok stars in Pakistan with 10.7 million followers and 289.2 million likes on her profile.

She was born and grew up in Karachi. She holds a Pakistani nationality. She belongs to a middle class Muslim family. Areeka Haq father’s name is not known and her mother name is who is a homewife. She has one sister named Bareeka Haq. She lives in Karachi along with her family.

She has completed his pre medical from Jinnah intermediate college.

The young star came under a lot of heat for being featured in the latest music video of the famous singer “Asim Azhar” as people did not think her talented enough to be featured in such a huge project and blamed Asim Azhar for just using the TikToker for her social media fame. After which huge names like Saba Qamar and many more actors took to twitter to shut down the trollers.